My Brush with the Fuzz 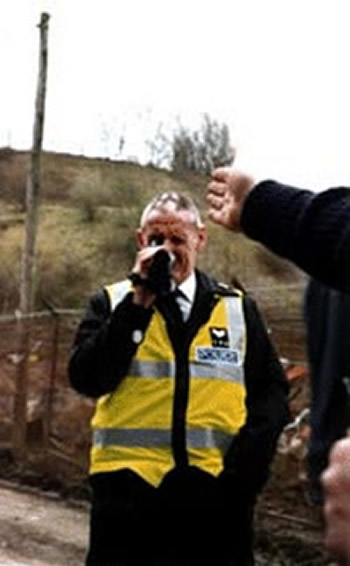 My Brush with the Fuzz at Dead Woman's Bottom

I've not had much experience of the police before, other than going through the breathalysed & banned routine many years ago - and getting carried out of Claremont Road by four Sherriff's Officers in the 1994 NoM11 siege. So getting actually arrested at Dead Woman's Bottom was a special experience for me. Some friends had made it their home for the past eight months, trying to stop a road going through this quite beautiful piece of nature - to a new open quarry mine so big it will be visible from the moon. They'd been evicted a few weeks earlier, and were going back to Somerset for a day of direct action - I went along for the ride and the research. The Name? - it got that in the Middle Ages when the area was used for executing witches and pagans - no doubt for their own good, and in strict accordance with the law and judiciary.

Of course, I've just written a book, UNCOMMON SENSE - The State is Out of Date, which takes a pagan kind of view on the whole political nation-state system that thinks it runs the world. The senior police officer wasn't to know that though, when he ordered my arrest at 2:35pm for a breach of the peace whilst alone in my wheelchair, at the bottom dip of the hill on the public road through the area, surrounded by a dozen relaxed policemen. I was just explaining to him that my companion on the trip had wandered off before the police ordered everybody to vacate - so she'd return and not know where everybody had gone, including me - her lift from the middle of nowhere back to London. Before I could finish explaining this to him he asked me to vacate the area and when I continued to explain he promptly ordered my arrest for a "breach of the peace" and four policeman lifted me and the wheelchair into their van which it just happened to barely fit. Lucky that, as I could never have managed to get up that steep hill on my own. And I was in very good company - locked in the cage at the back of the van was eco-warrior Arthur Pendragon, crowned King Arthur on 3rd January this year at Kingston(e)-upon-Thames after successfully reclaiming his Excalibur sword from the stone hand of the state. It had been illegally seized by the police at the 1997 Reclaim The Streets Party in Trafalgar Square.

There followed, I presume, the usual processing routine - compounded by their finding some dried plant material on me (cannabis) and some suspicious looking stuff of a non-controlled variety that should pose no problem after analysis. I was immediately re-arrested, moved for another routine, then locked in and out of the police cell four times before finally getting released on bail, without charge, after darkness had fallen. Though it's never happened before I wasn't confused or surprised by the inane inhumanity of it, or pissed off that all they wanted to really do was "find" as much crime as possible - they love it - "Oooh, what have we here?" Never mind the absence of any initial victim - the police will take care of that. When I understand why something senseless is being done, it doesn't bug me so much. In fact it becomes almost amusing, and if their search had somehow missed one pill, I definitely would have heightened the experience by taking it when locked in that police cell.

I have devoted a chapter in my book to the un-natural inefficiency of organizations operated by the state - including the police force. But even so, I got a real slap in the face at Dead Woman's Bottom with a personalized "full monty" display of the plod in action. The most striking single realization to hit me was that your basic DHL courier driver, trained to use a hand-held processor, has far more technological power and responsibility at his fingertips than does your average plod and his average superiors. I had to spell my full name out at least six times to different police men and women for one reason or another - each time studiously jotted down in pencil or pen on one or another of their multi-part forms or notepads. I reckon the police could make a fortune at auction by selling off autographs of all the famous people they have held in custody.

We are talking tedious and tiresome "business" practice. Notwithstanding access to a few high-tech toys, today's police are STONE AGE in terms of their procedures, their structural efficiency, and in their ability to really harness today's technology. OK - let's imagine that the war on drugs is over by the end of the millennia as the world's banking and currency systems acknowledge that they would collapse were this vital and valid element of world trade to be excluded. Let's even imagine for a minute or two that the police aren't wasting ANY of their expensive time on prosecuting victimless crimes and reasonable behaviour. OK this is all good stuff, but now who's protecting us from the people who might want to steal our money and valuables, our expensive substances and our high-tech toys, our designer sneakers and cellular phones? You think these guys are going to be able to protect us efficiently - even when we're not funding them to waste their time on non-crime? I don't think so. Most small supermarkets and bookstores adapt more efficiently to technology than today's disconnected police. Maybe we should let the supermarkets look after law and order. But that is almost as ridiculous as what we have now.

The current police organism thrives on crime since ever more criminals creates the need for ever more police, and "the force" inwardly assumes crime to be an ever-growing problem. As an organism, of course, this is its best growth and survival strategy. The invention of ever-more victimless crimes is a natural result of such a structure - a system that verily feeds upon crime and grows along with it. Nobody gets rewarded if the police reduce crime - and thereby the bulging jail population and their own numbers.

Nevertheless, crimes with victims can and do still occur and most of us would like to reduce the likelihood of us being that victim - without needing to pack a gun, take up martial arts, or live in a fortress. We could, reasonably, look at crime in society as a disease - and see that the current approach to its treatment is actually prolonging and exacerbating the disease that we are paying the plod physicians to cure.

You've heard the story of the traditional Chinese doctor who gets paid small amounts regularly, but only while the patient is healthy and well. Well what about a police force who survive by getting paid regular small amounts when you are not threatened - and then have to foot the bill if a crime does take place that causes you a loss? Doesn't that sound great? It's actually more attainable than it seems. We already have two of the parts - they are just not connected. We pay a substantial amount in taxes already to fund a police force that depends on crime for a living. That's one part. The other part was footing the bill when crime happens. The insurance industry does that as we pay them regular small sums to cover the whole cost of whatever we choose to insure. They pay money out when crime occurs, and even if you are murdered right after you send in that first cheque for fifty pounds, they will foot the bill for the rest of your surviving partner's mortgage and the children's education and upbringing. Believe me, they would be happier if you were not murdered or even robbed. They have plenty of other things that people insure against, from rain cancelling play to earthquake demolishing buildings.

What we basically want is to pay someone to protect us from crime and to have that same someone compensate us for any lapse in their service. This gives us a whole system with a complete feedback loop. It would be in the interests of such someone to actually reduce the level of crime that represents their lapses and their main cost. And it would certainly not be in their interests to waste time and money because some person prefers cannabis to booze, or indeed waste money putting anyone in jail for their personal habits, so long as they do not adversely affect anyone else's chosen lifestyle.

So, what does one suggest - should the competence, expertise and trustworthiness of the world's police forces be directed towards running the global insurance industry? Or should the skills, technology, and responsibility of the global insurance industry be directed towards making the world a less criminal place in which to be?

As a footnote - whilst I was sitting in jail following arrest at Dead Woman's Bottom, a fax arrived in my office finally ending the three-month search for a distributor to handle Uncommon Sense, a book that fits this "Chinese doctor" concept into a larger framework. In a funny kind of way, it seemed appropriate that this should arrive the day I am in jail on two charges, each with a chapter in the book dedicated to them. Now publishing 2nd July.