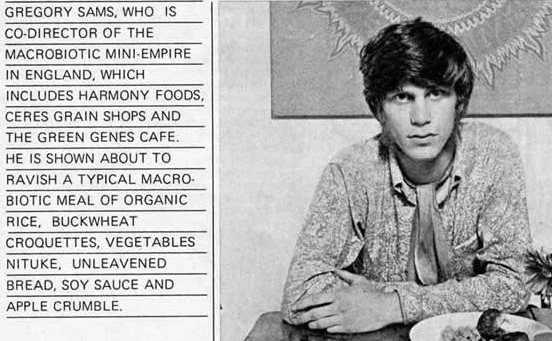 I suppose my Sixties began in 1964 when I heard Bob Dylan singing The Times They Are A-Changin’. At the age of fifteen I had no idea how, but it felt like something was simmering. Within a year I had smoked my first pot, hitched to Morocco and let my hair grow. A vegetarian from ten, I embraced macrobiotics in 1965 after my brother Craig brought news of it back during his last summer break from university. My diet became what I DID eat, instead of what I did NOT.
The hotbed radical campus in America was University of California Berkeley, which is where I went in Oct 1966, as the Summer of Love gestated across the San Francisco Bay. Turned onto acid, tuned into the Universe, and at the end of the year dropped out of a tree (not high, either way), injuring my spine. Don’t think that’s what Timothy Leary  had in mind.
Return to England on a stretcher in early 1967 and my ‘Summer of Love’ begins at the end of April with London’s legendary 14-Hour Technicolour Dream at Alexandra Palace. The hospital (Stoke Mandeville) sent me home on trial that weekend to see how I managed life in my new wheelchair. Had a cosmic time, immersing myself in the UK’s new-born psychedelic culture with Pink Floyd, Soft Machine, Pretty Things, Arthur Brown and many more.
Later that summer I was dishing out free brown rice and vegetables to hippies on the Portobello Rd once a week, inspired by the Diggers in California who had been inspired by the Diggers in England a few centuries earlier. But I still planned to get back to University after a year adjusting to the wheelchair thing.
My brother Craig, finished with University, was in the process of setting up a macrobiotic restaurant in a basement near Paddington, after his short-lived illegal venue in Notting Hill Gate had been closed down. But late in 1967 he has to abruptly and unexpectedly leave the UK for several years and it falls to me to pick up the reins, completing and opening the restaurant in early 1968.
Later in 1968 and I’m sitting in the yard behind a bustling Seed Restaurant kitchen listening to Mary Hopkins singing Those Were the Days (my friend, we thought they’d never end. We’d sing and dance forever and a day

). Tears welled in my 19-year old eyes as I experienced in advance the nostalgic sadness of the day when I had gone ‘straight’ and was looking back from another world. How could you beat having the hippest restaurant in Sixties London, serving organic wholefood dinners to the likes of John and Yoko and supplying free meals to those with no money. We played the latest music of the era, put together on reel-to-reel tapes by the one and only DJ Jeff Dexter. I produced a magazine called Harmony that John Lennon supported with a great cartoon. It was cool.
I was a fervent crusader for macrobiotics, intent upon changing the eating habits of the world, and thereby the world itself. At the time I felt certain that the whole world would be eating brown rice and vegetables in a decade. After all, ten years ago I had been nine, and the world seemed to have changed a lot since then! Everything seems so possible, but you don’t know what is until you try.
Halfway into the 60’s, few people had ever heard of brown rice, and the only sesame seed they were ever likely to encounter was on top of a hamburger bun. Sunflower seeds were strictly for the birds and the only beans or pasta in the British diet came in a tin with tomato sauce. If you were lucky enough to find pure fruit juice on sale, it would have come from Germany in a glass bottle and probably cost as much as a bottle of decent wine. Western bread was white, except in a few places like Germany, Poland and Scandinavia. Disease was seen as a random event – the fickle finger of fate, disconnected from personal lifestyle or environmental pollution. Your NHS doctor was wholly responsible for your health.
We named our company Yin-Yang Limited, since macrobiotics was all about balancing the yin and the yang, and taking responsibility for your own health. Our company logo was the yin-yang symbol and in 1968 our restaurant sign was probably the only place in London you would see that, now common, symbol. I remember getting excited when I first saw it somewhere else – on the Korean ambassador’s car (it’s their flag).
Though against the war in Vietnam, short hair and pin-stripe suits, the main enemy I perceived in those days was the sugar industry, poisoning our youth with their evil and addictive drug. As I passed those big sugar tankers on the roads, I had visions of placing plastic explosives on them, in a subversive terrorist action for the good of society. I knew our dishwasher at Seed restaurant shot up heroin in the toilet, but when I caught her drinking Coca Cola in the kitchen she was sacked immediately.
1969 onwards… Seed restaurant took care of the Sixties for me. Customers wanted to cook at home, so Ceres natural food store was added. Next a wholesale company, Harmony Foods, so other shops could stock the food. Hippies from different cities in the UK and Europe came for supplies with which to spread the dietary revolution. Many of our early customers grew to became regional or national wholesalers.

Magazines (Harmony and Seed), cafes (Sprout and Green Genes), wholemeal bakeries (Ceres retail and wholesale), a bookstore and pop festival catering, including Glastonbury ’71, were all part of our agenda in those early years. It was full on and full of fun. 1973 arrived and I was still waiting for Mary Hopkins’ nostalgic vision to arrive.
There were plenty of others making new music, promoting free love, living in communes, selling incense and dispensing the wisdom of the East. The primary dream of the Sixties, for my brother and I, was to turn people on to natural and organic foods and the idea that diet affected health and happiness. It was so clear that this was the way forward – the right sort of food for healthy human beings. And when you know you are right you assume that eventually everybody else will come around to your way of thinking (precisely the sort of attitude that makes fundamentalist religious freaks so dangerous). It seemed like it was only a matter of time until the message got across, and it soon did.
Today, over forty years later, I admit to being surprised, delighted and proud of the strides that have been made. The whole world may not be eating natural organic foods, but for every one person who did so in the Sixties there are thousands doing so today. Whole grains and pulses and seeds are back in the human food chain along with a huge growth in sustainable agriculture. Organic natural foods are now a multi-billion dollar industry and millions are aware that the food they eat has an effect upon the health and happiness they experience in their lives. We have come a very long way.
And yet, looking at the world today, it seems like the utopia we imagined remains on the distant horizon. I am surprised, depressed, and appalled at the progress of the industrial juggernaut that tries to divorce our existence from the natural world. Trucks full of liquid sugar are the least of our problems. Though we ‘blew the whistle’ on them in the 60’s, food industry chemists have spent the years between developing countless new means to cheapen, adulterate and preserve our food. The enemies of harmony push relentlessly upon Europe’s door in their efforts to introduce genetically modified experiments into the food chain.
Though most of today’s green movements evolved from the Sixties, we have witnessed increasing pollution of our food and our environment ever since. New varieties of disease and illness have visited mankind, with the pharmaceutical companies growing fat on the back of them. Their lobbyists are well-funded.
The war on drugs continues and any substance that makes us feel good without needing a prescription from the doctor is illegal, alcohol excepted. Win the late 1960’s we thought that cannabis would be legalized within a few years and that society would soon recognise the value of LSD to our cultural evolution. Few realized how determined the status quo would be to prevent us from tasting forbidden fruit that offers knowledge and bliss. Today (2015) the war seems to be faltering, the madness of it openly acknowledged, in some nations.
And yet, as scary as the world appears to be to me, in many ways these still are “the days, my friend,” just as much as “those were the days.” Year on year I have watched the seeds that were planted in the Sixties flower into a new global consciousness. Before the Sixties you very rarely heard people talking about harmony, environment, vision, meditation, visualization, massage, yoga, aromatherapy, organic food, natural healing, conservation or personal computers (another concept of the times). There were many who believed that we would all be living on convenient pills by now. They were wrong.
It turns me on to see more and more of humanity connecting to this wonder-filled world – to know how many are looking within, as well as outside of their selves. It turns me on to see how much more joy and inspiration there is in the world – gods know, we’ll need it in the times ahead. And it turns me on to continue delighting in so many of life’s features that stem from the Sixties.
Mary Hopkins, I’m still lovin’ it.
Gregory Sams

And after the Sixties …
The business grew into the distribution and manufacture of natural foods (Harmony Foods and Whole Earth) until 1982, when I left to launch the first VegeBurger onto the market, creating and christening the product. It did well, added a word to the language, and I sold it in 1988, leaving the food industry behind me. Take a two year advance on retirement, until I discover chaos theory. 1990 open Strange Attractions, world’s only chaos shop, designing and publishing lots of fractal imagery and computer graphics, later licensing these to others and through agencies. Millions of fractals reprinted throughout the world. 1998 publish my book Uncommon Sense, the State is Out of Date, outlining the messages and lessons that chaos theory has for our lives and societies – sell 3200 copies. From 2000 to 2007, am writing and researching next book, published 2008 and titled Sun of gOd – Discover the Self-Organizing Consciousness That Underlies Everything. Spend my time promoting this book then in 2013 I upgrade my first book, retitled The State Is Out Of Date, We Can Do It Better. Many talks and interviews on both topics can be found online.

All Posts »
PrevPreviousOh what an unnecessary war!
NextShedding light on our Sun, an interview with Gregory SamsNext