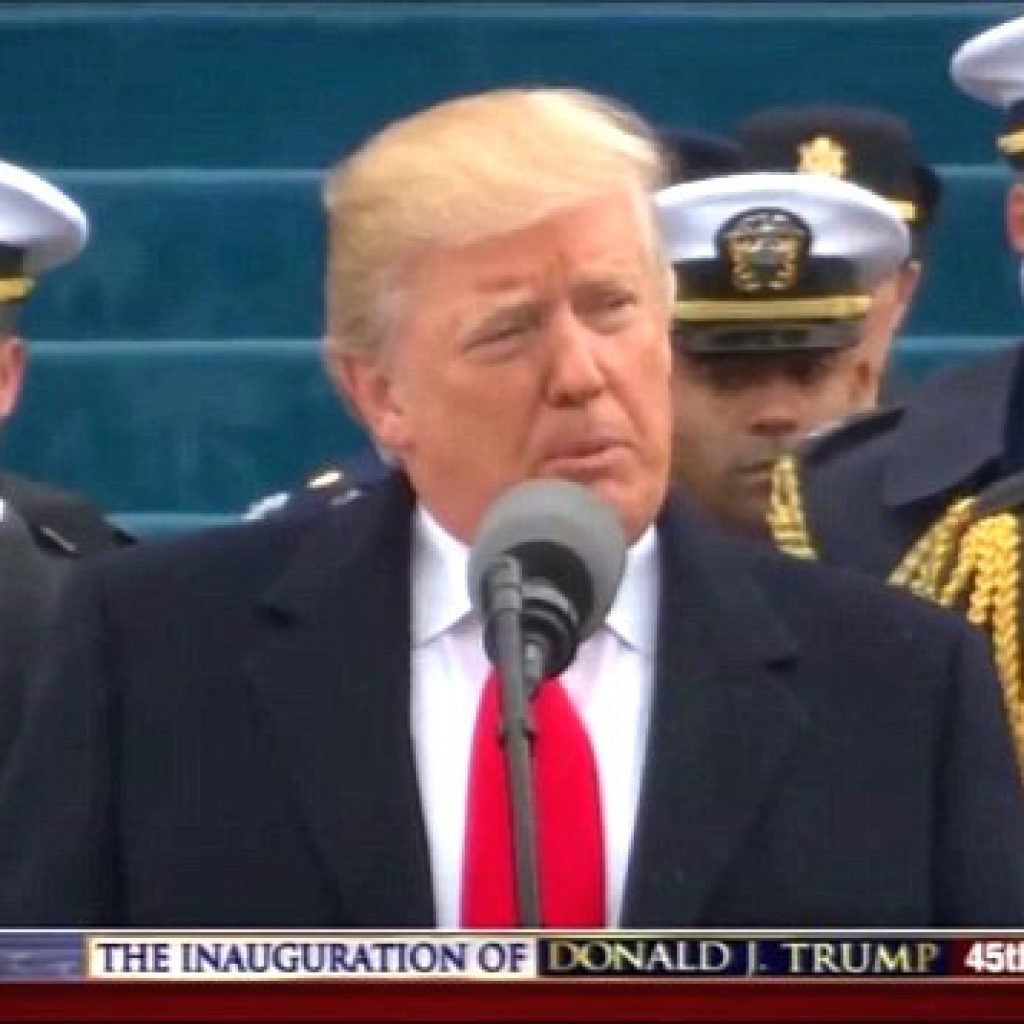 This inauguration was a strange and powerful event. I was as shocked and horrified as many at the thought of a ruthless property tycoon holding the powerful position of American President. That said, I took great pleasure in the defeat of Hillary Clinton, whom I loathed for deeds already committed. But as those who know me know, I see voting as little more than a novel way of determining who is to be the ruler and one which magically bestows upon them the will of the people, even if just a quarter of “the people” made up the majority of those who voted.

I found Trump’s inaugural address to be riveting and at times it truly moved me, so much that I remember wondering if I could bring myself to admit to this. He was saying a lot of right-on stuff about America being controlled by the very establishment elite that surrounded him right there, and how he was giving power back to the people. I felt better about my feelings when two BBC commentators thereafter said they thought many of Trump’s words could have come out of Bernie Saunders’ mouth.

When candidates are on the campaign trail, we are used to them saying whatever they need to get votes, delivering conflicting messages to different groups. Now Trump has won he doesn’t need to re-iterate these promises, but did so in force, in a speech that broke tradition and spoke of America today, recognising the internal decay that is apparent in much of it. He has hand-on-heart forcefully promised to bring the American people into the process of government, and break the power corporations exert on the state. Whether he can deliver this is another question, but he has left no room for excuse if he fails. With his reputation so strongly pinned to success, failure could destroy him. Whether America goes bankrupt in the process is another matter.

Yes, I was impressed by his address overall, despite a few references that stirred those hairs on the back of my neck. It sounded like he meant what he was saying, but maybe he’s just good at that, regardless of his intention. I am keenly aware that many despots have known what people wanted to hear and led them to ruin on the pretext of delivering what they wanted. America’s state promises to protect its people from terrorists, and bleeds them dry fighting bogeymen of their own creation. Will Trump deliver on his promise to end extreme Islamic terrorist groups, with the consequent loss to America’s war industry? We shall see.

I was deeply disturbed by three aspects of the event, offsetting my enthusiasm for the new President’s powerful rhetoric. First was the strong militaristic imprint of the occasion. Just as he promised to give control of America back to the people a curious group of soldiers in dress uniform assembled behind him, filling the frame until being dispersed. He beat the patriotic drum and wants to rebuild America’s sadly “depleted: military – one already spending more than the next 8 nations combined (not something he mentioned). I later discovered that military chiefs shot down Trump’s request for tanks and missile launchers to be included in the official parade (like in the old USSR). They would have chewed up the roads.

Senator Chuck Schumer gave me chills all over, speaking before Trump about repairing the nation’s fractured press, and dealing with threats to the state, foreign and domestic. He heaps praise on the military and read out a nauseating letter that he found inspirational, from one Major Ballou, of the Rhode Island Volunteers in the American Civil War. The letter to his wife is all about why he is willing, and happily duty-bound, to die for his magnificent state. My stomach turned at “Sarah, my love for you is deathless, it seems to bind me to you with mighty cables that nothing but Omnipotence could break; and yet my love of Country comes over me like a strong wind and bears me irresistibly on with all these chains to the battlefield.” Less that 1 in 20 of the Union fighters were lost that day and Sullivan Ballou was one of them, his leg torn by the cannonball that killed his horse. He was carried off the field, his leg amputated, and abandoned when the army retreated, his body never to be recovered. I wonder if his patriotism was comforting as he approached a lingering end.

Ah, then there was the religion – lots of religion, though nothing of the Muslim variety. We got more on sacrifice here as well. Before he was even the candidate I recall being chilled by seeing Trump in a ritual with fundamentalists laying hands on him and all kind of shit. When researching my book, Sun of gOd, I realized that religious fundamentalism could be as dangerous coming from Christians as from Muslims or Jews. When you are obeying God’s commands there is no place for human idiosyncrasies like compassion or rationality. So yes, this heaving steeping of religion in the inauguration was disturbing, though raised a laugh when the preacher man hoped God would bless Trump with the humility of Jesus.

The final disturbing part was the distinct absence of colour in this supposed melting pot of the world. We had to endure bouts of patriotic singing from two different choirs, about 40-60 strong and as far as I could see there was not a single face of colour in either of them, apart from one man of oriental descent I spotted. For a while I wondered if the Obamas would be the only two Africa Americans at the event, but then a handful of others became involved. There was some lip service and the old cliché about all races having the same colour blood, but white faces predominated to a noticeable degree.

For me, the clinching finale of this political charade was at the Presidential Lunch where Donald Trump stands up to say how honoured he is that Bill and Hillary Clinton had joined the party. He asks them to stand and showers them with his respect! Sure they hurled scathing abuse at each other during the campaign, but only for political reasons (which we all know to be phoney). Now the match is over, the loser congratulates the winner and shows them respect, like tennis players shaking hands at Wimbledon.

That’s politics for you, my friends, and if you remain optimistic that voting and the wonderful democratic process are going to ensure that only good people get into power then you have been sadly unobservant of what has going on for as long as it has been going on.

All Posts »
PrevPreviousUS Election – It’s not about who won.
NextIt did not start with Donald TrumpNext

3 thoughts on “Trump Inauguration – Don of a New Amerika?”