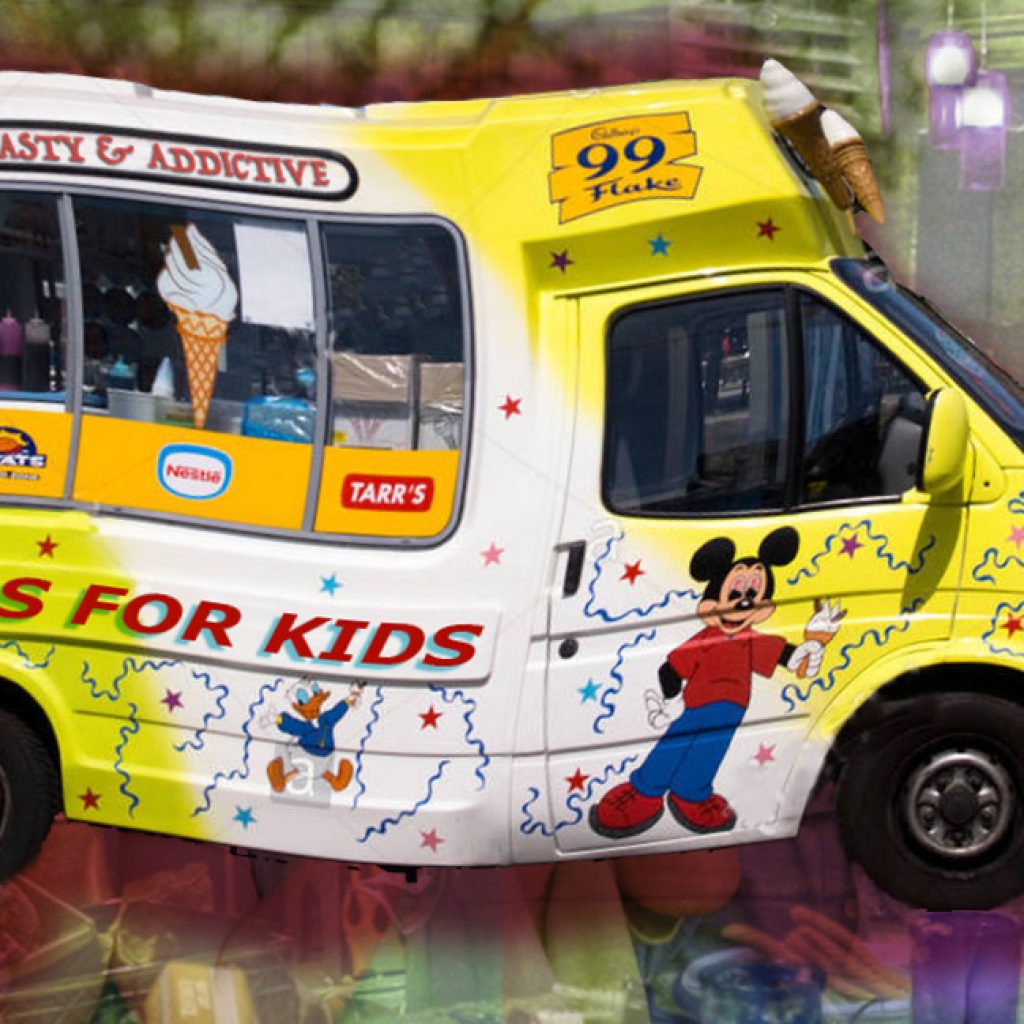 Killing them softly with ice cream

When I was a young man smoking was permissible everywhere. My 8thgrade teacher lived on cigarettes and black coffee, chain-smoking in a class of 13-14 yr olds (Mary Hogue, excellent educator). Nobody thought it unusual. During my 1967 stay in Stoke Mandeville’s spinal unit, the ward was filled with smoke and the League of Hospital Friends wheeled their trollies through the hospital, selling cigarettes, sweets, and tabloid newspapers (in league with the devil, more like). Taxis, buses, airplanes and cinemas all had ashtrays built into the seats.

Millennials might scratch their heads and look back in astonishment, finding it hard to believe that such practices were ever commonplace and culturally acceptable. And there will be many things that their children will be looking back upon with equal astonishment.

One thing, for sure, will be the appalling phenomenon that disturbs many a summer afternoon in the garden for me, as I enjoy Sun overhead, blackbird song and the rustle of wind in the trees.  It is the sound of an ice cream van traveling around the neighbourhood with a playful tune, pausing in every road as the pushers inside pedal dangerous and addictive drugs to our innocent children.

Sugar consumption is probably responsible for more death and disease (of humans) than any other item in the food chain, processed meat included. It saturates our food chain and it is addictive, as any who have sought to give it up well know. Government knows it is toxic but their hands are tied. According to the New Statesman. “They are paralysed by the economic dominance of what British colonialists called ‘white gold.’ The sugar industry, like financial services, is too big to fail.”
As if their dangerous edibles were not enough, ice cream vans fill children’s lungs with toxins too, as engines run constantly to power its freezers. The“black carbon” in their exhausts is a soot-like substance that “is particularly dangerous for babies and stunts the growth of children’s lungs as well as causing cancer and dementia,” according to the Daily Mail. Levels can be 40 times the WHO safe limit.

So we think it quaint  to have have vans pollute our neighbourhood on a hot afternoon, selling toxic and addictive treats to children? If opportunities are to be equal then let us have expensive cars with tinted windows touring the neighbourhood blaring rap music and selling cocaine and crack to our teenage kids. Complete the circle.

Have I been on a rant? As the culture changes, maybe remnants of the mafia-like gangs who control ice cream territories will sample some magic mushrooms and see the light. Perhaps they will become entrepreneurs selling healthy treats and nut ice creams to children, or be replaced by people who do, with solar panels instead of chugging diesel.

I am being both silly and serious here since if that is what we want it can and could be provided. Better yet, make them at home. We are moving towards a tipping point at which humanity’s concern for the health of our beautiful host planet will change our interactions with it. Don’t be sold into the myth that raping the planet must be done for us to sustain ourselves. It is an expensive and short-term folly, dictated by the state’s need for expansion ad infinitum, a perfect oxymoron.  Future generations, assuming such exist, will find it difficult to understand how we could have engaged in many of the practices that today we take for granted as normal behaviour.

4 thoughts on “Killing them softly with ice cream”