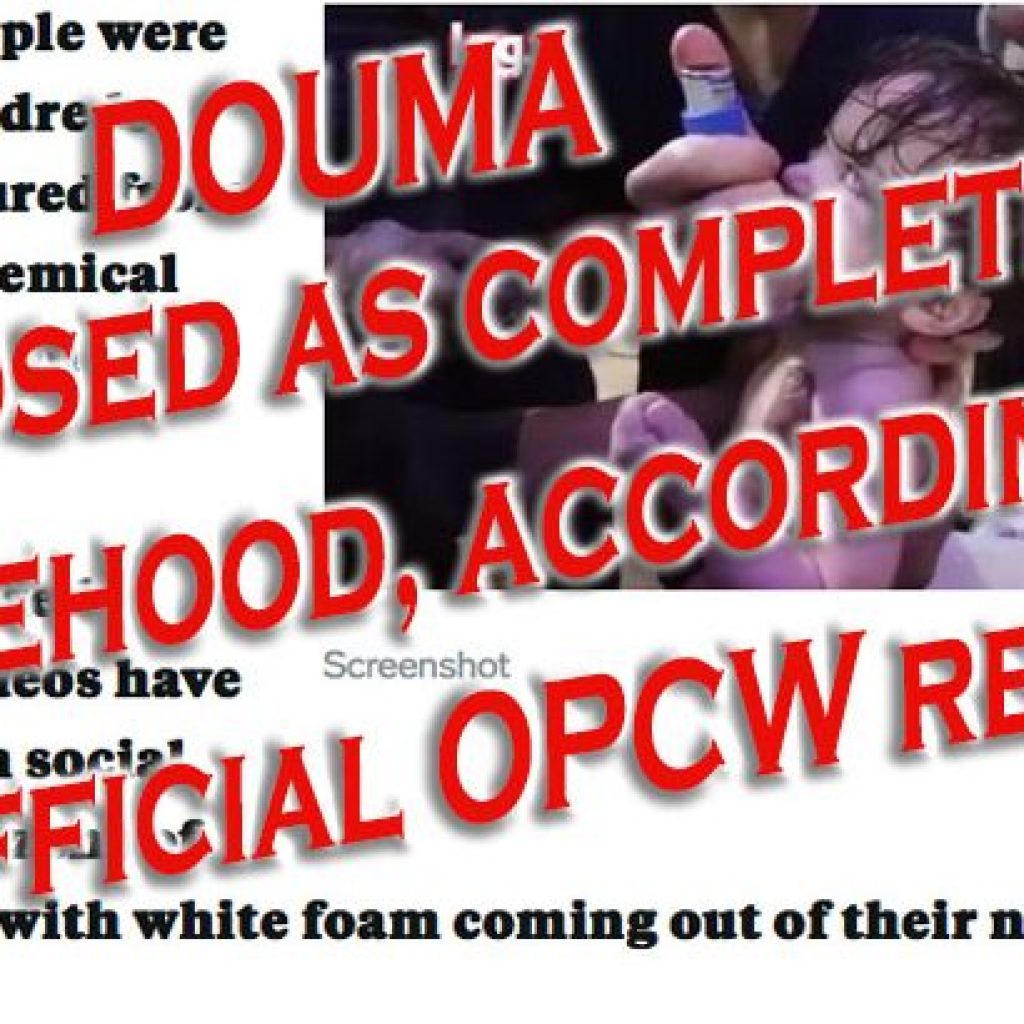 Another so-called chemical gas attack is due any time now.  Same old story. The Syrian army is winning decisively by conventional means and the jihadists are up against the wall. Their only hope is to bring in Western forces with another fake gas attack, knowing they are all too eager to engage.

The last one happened this April 7th in Douma, with a short video shot on location. Six days later the US, UK and France hurled 100+ missiles at Syrian targets in punishment. One day after that, the OPCW (Organisation for the Prohibition of Chemical Weapons) inspectors arrived in Douma to examine the scene of the crime.
Remember all that? It received headline news coverage, complete with video of scud missiles launching from ships and inspectors arriving in Damascus. What came of their report?

Twelve weeks later the OPCW issued its report, to a whisper of publicity, reporting that no evidence was found of a chemical weapons attack. Traces of chlorine were found at two locations. It’s a household chemical. They found no evidence on the ground, or residues in people, of chemical weapons use, saying only that “the persons affected in the reported incidents may, in some instances, have been exposed to some type of non-persistent, irritating substance.”

The OPCW report is somewhat less than conclusive. Note the vagueness of “may in some instances,” which indicates a possibility not based on evidence, and limited to a few. In other words, some of “the persons” may have been exposed to a temporary irritant before the event, which was filmed on the spot by the White Helmets. Or they may have just been acting. The mention of “persons affected in the reported incidents” does not identify them as victims and suggests that some may have been exposed to something temporary. So the others, most of them, were not exposed to even anything. What are they telling us, in this round-about manner? There is no mention or confirmation of any dead or damaged victims of the so-called attack, despite the media horror story we were fed, based on unverified photos and reports from the jihadists who, it appears, stage-managed the entire event.

At that time, with the real Syrian army ascendant, gassing civilians near a hospital would have been a pointless military move, putting aside the madness of waving such a red flag at Uncle Sam. Whatever the propaganda tells us of Assad, there is never any suggestion that he or his generals are that stupid.

The Syrian Army now needs to end this war, and cannot leave an important province in the hands of armed and murderous foreign fighters of ISIS, Al Nusra and Al Qaeda. The weakened terrorist forces have only two options – to surrender or play the chemical weapons card again. This time they could create real casualties, from the ranks of captive young women and children taken during ISIS’s murderous assault on the Yazidi population. They are without scruples or morals.

On August 22nd, Trump’s National Security advisor, John Bolton, appears to have given the cue to the jihadist insurgents for another false flag event by once again publically pronouncing that “…if the Syrian regime uses chemical weapons we will respond very strongly and they really ought to think about this a long time.” American ambassador to the UN, Madeleine Albright, expressed similar sentiments. They are laying the foundations for another fake attack. America, and perhaps Britain and France, will be poised to send more missiles to an undeserving recipient and do whatever they can to prolong conflict in the Middle East and maintain healthy profits for their arms industries.

The US military establishment would hate to lose some of its new best enemies, at a time when they are terrified that Trump might make peace with Russia. Without enemies, how could the military and intelligence communities defend their ever-increasing budgets? As I have put it before, the voracious military establishments of America and Britain are threatened not by any enemy, but by the absence of one. Without an enemy to fear who needs to support the expensive and destructive military and intelligence communities that act like a state within a state?
Of course, I hope another gas attack is never staged, and that events move swiftly to an end of the conflict in Syria without further fighting or civilian death. I hope that the Yazidi captives are freed and able to rejoin and rebuild their communities. Most of all I look forward to the day when peace has comfortably settled into the whole of Syria, from where my father’s parents emigrated to America over a century ago. I have been twice to the village where my father’s aunt’s descendants lived, as did that aged aunt when I visited Mishtaya, a village in the hills outside Homs mercifully unscathed by the war.

May there be an end to pointless conflict. Peace is not an unnatural condition for mankind. It was the norm for millennia before rulers imposed themselves upon developed and largely peaceful civilisations around the world.