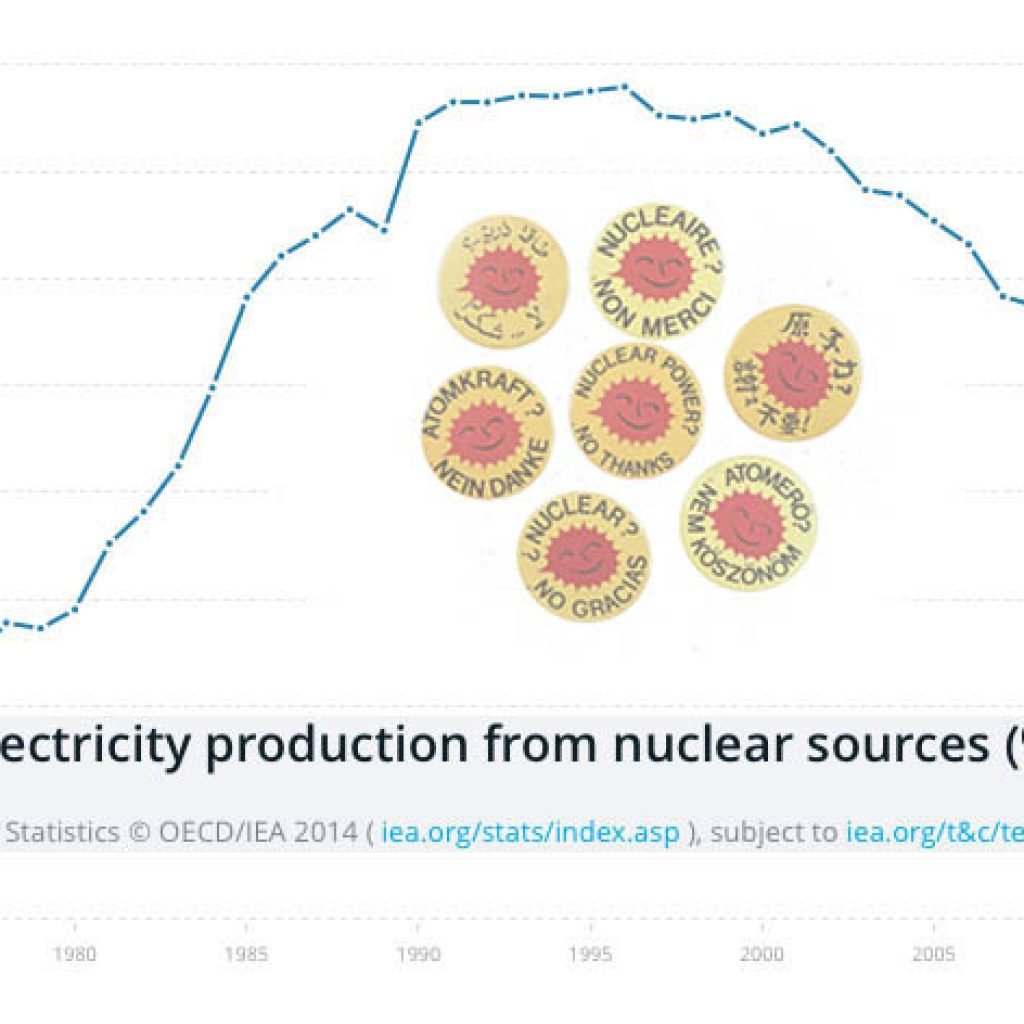 Nuclear Power on the Ropes ?

Good news for the planet as Hitachi abandons work on a new £16 billion nuclear power plant in Wylfa, Angelsey, writing off the £2.4 billion invested so far.   It was explained as an act of  “economic rationality.”  They also put on hold their plans to build another nuclear power plant in Gloucestershire. Nuclear power is the most expensive option there is – the power initially hyped as being too cheap to be worth charging for.

Nuclear’s share of global electricity supply plummeted from 17.6% in 2006 to 10.3% in 2017. Perhaps the message is getting through after Three Mile Island, Chernobyl and Fukushima. Last time we heard, Fukushima was spilling 300 tons tons of radioactive water into the Pacific daily. TEPCO’s fulsome regular  reporting to the IAEA gives all manner of information on their radioactive discharges – apart from the quantity discharged!

You know it doesn’t make sense.  Renewables already provide 33% of Britain’s electricity, versus nuclear’s 21%. Half of UK nuclear plants are scheduled to shut down by 2025 and until renewable capacity rises to cover that 10% gap it would be wiser to import abundant and inexpensive natural gas. So what if it comes from Russia?  It is preferable to scarring this island with fracking sites and is significantly more environmentally friendly than coal or oil. None of these, of course, come with the existential risks inherent in nuclear power. Nor is there a need to secure and monitor other power plants for thousands of years after their functional life has ended.  Does anybody really think that those who manage the nuclear power industry give a toss about generations a thousand years from today?

The disastrous Hinckley point continues to be built, way over budget and behind schedule.  The builders of the site already show a disregard for outraged public opinion, as they dump 300,000 tons of contaminated mud  in the Bristol Channel near Cardiff.  If this monstrosity is every completed it will supply electricity at well over the price of all other available sources.

The Guardian summed up  the insanity of Hinkley Point C, the world’s most expensive nuclear power plant, and one that could well be obsolete by the time it is operational.  “Some critics of the project have questioned whether Hinkley Point C’s nuclear reactor will even work. It is a new and controversial design, which has been dogged by construction problems and has yet to start functioning anywhere in the world. Some experts believe it could actually prove impossible to build.”

What to do? I have been out on the streets over nuclear and other issues. Did it make a difference? To me it certainly did, and enabled many to see through the veil, with their own eyes, the ‘dark forces’ at work. Excuse that cover-all term but there are powerful forces active in the world that scorn noble ideas like freedom, justice, and the ‘good of humanity.’ The thought of innocents dying may even be pleasurable to them. Crusaders of the 11thcentury took delight in the torturing and slaughtering of Muslims, by their own accounts. They did not become extinct, but still populate our world, often holding positions of great power.  Many complacent citizens think they are a necessary evil. They are not. We can live without their rule.

It may be a small step, but I have switched over to a renewable energy supplier in the UK and enjoy knowing that my money does not go to support nuclear. There are over 10 green energy suppliers in the UK today, and 3 of them made Which’s top 10.  That, and I wrote a book.

3 thoughts on “Nuclear Power on the Ropes ?”