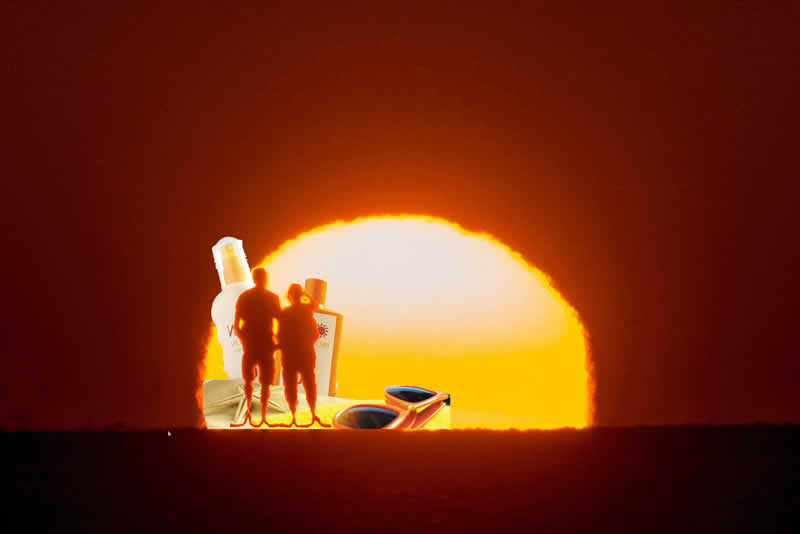 Is Sunblock As Dangerous As Smoking?

For decades we have been told to fear the light of our local star, to protect ourselves from its harmful rays with high-factor creams and lotions. It’s an $18 billion dollar market, projected to reach $24 Billion in 2024. I wouldn’t bet on that any more, as more and more scientific studies indicate that sunblock causes more harm than good – harm equal to that caused by cigarette smoking.

From a technical point of view, Sun’s light brings life to every living thing on planet Earth, as well as lifting spirits on a sunny day. It could make sense that after two million years of living together, our organism would have found ways to co-exist with and benefit from those rays. This is now seen to be the case on many levels .

A Swedish study of 19,518 women over a 20 year period determined that “avoidance of sun exposure creates a risk factor for death of a similar magnitude as smoking.”  During the period, those women avoiding Sun exposure were twice as likely to die as those getting maximum exposure. There is clearly a lot more going on than Vitamin D and healthy bones since getting those healing rays reduced the threat from a variety of life-threatening ailments. As they summarised “We found that all-cause mortality was inversely related to sun exposure habits.” In other words, the more sunlight subjects got the less likely they were to die of anything.

A major US study has shown that regular exposure to sunlight, without burning, reduces risk from “various types of cancer, cardiovascular disease, Alzheimer disease/dementia, myopia and macular degeneration, diabetes and multiple sclerosis.” With some of these, such as bowel cancer and breast cancer, it is the Vitamin D in sunlight that does the trick. But with multiple sclerosis and prostate cancer they determined that Vitamin D is not the factor responsible.

Regular exposure to sunlight has been found to bring us protection from any harmful effects of being out in Sun’s light, as our clever skin produces more melanocytes. These cells produce the pigment melanin that gives colour and “protects“ skin from incoming ultraviolet B light, which can stimulate melanoma.  But UV light is what triggers our skin to produce the Vitamin D that every cell in our body is equipped to absorb. Melanin doesn’t so much protect us as enable us to benefit from the blessing of sunlight.

In America today, over 40% of the population are classed as Vitamin D deficient, and in Europe over 50%, with numbers going up. Vit D is difficult to obtain through the supplements most take. Fish oils supply some but only sunlight provides a full-spectrum healing and vitalising energy, which is why governmental and commercial portrayal of sunlight as a danger to our health is little short of criminal.

The prevalent use of sunblocks with factors so high that Vitamin D absorption is reduced to negligible has probably been responsible for hundreds more deaths than have fatal melanomas been prevented.  Sunblocks may also have been responsible for the increased sensitivity to sunlight in those whose skin has forgotten how to make the protective melanin that tans our skin.  Burn is bad, for sure, but tan is good, we now know.

Are we surprised by the discovery that sunblock gets absorbed into our skin, as if there was any place else it could go? Some of the ingredients may not be beneficial to our health, and it isn’t that surprising. Are our bodies designed to absorb things like avobenzone, oxybenzone, ecamsule and octocrylene as food through the skin?

We saw something similar with the slow-motion margarine massacre as my generation grew up, strongly marketed to us as healthier for our hearts than butter, only for us to discover over 60 years later that hundreds of thousands of hearts (possibly millions) had failed prematurely because of the hydrogenated fats that made margarine solid, and slowly clogged arteries. It was not just in margarine, but widely used as the shortening in baked goods and so-called “vegetable ghee” in Indian restaurants. It is still in the food chain but finally disappearing from products where ingredients show on the label. I stray into topic drift.

Do what is natural and human. Don’t be frightened of reaping the benefits of our host star, Sun. Sunlight puts the energy into food that we convert to human life; it illuminates and informs our world, it warms our skin and feeds our soul.

If you don’t already know, I am an actual Sun-worshipper and author of the only book in print that looks at our local star with due reverence.  As such, I have impishly wondered if the fear of sunlight instilled in our culture is a residue from the days when Sun-worship could get one burned at the stake, it having once been the norm. We have thrived upon Sun’s rays throughout the journey of our species. That is something to love, not fear.

PRACTICAL ADVICE –  Do not let your skin burn, and throw away the sunblock. If this just means 10 min first exposures then start there and slowly build. Use sunglasses sparingly.   If your eyes aren’t able to detect UV light then your body’s natural responses to it might be impaired. Personally, I treat my skin to some sesame seed oil (not-roasted). It is super high in Vitamin E which our skin loves to absorb and which helps it eat up the sunshine. My brother Craig touts olive oil. We can’t agree on everything.

All Posts »
PrevPreviousDeep State – get a grip on it
NextIS SUNSCREEN TOXIC ?Next

5 thoughts on “Is Sunblock As Dangerous As Smoking?”