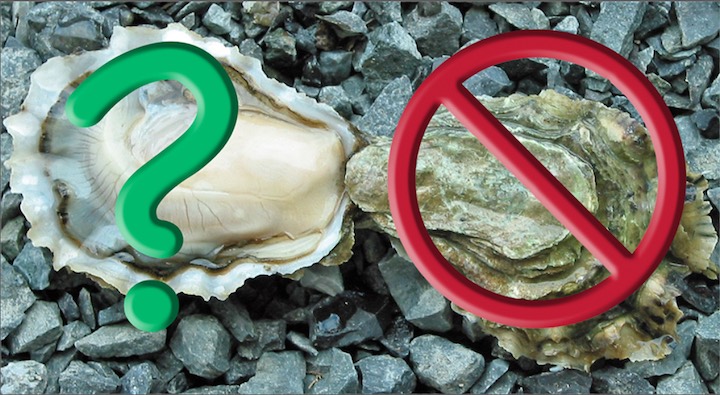 Have you heard of bivalvegans yet? When I created the VegeBurger in 1982 there were basically ‘normal’ eaters, vegetarians and the odd vegan. It was simple. All of them were omnivores, able to eat a wide range of vegetable and animal foods, whether they chose to or not.

Now as we splinter into factions it is starting to look like dietary groups may overtake the expanding initialism that began with LGB in the mid 1980’s and is now up to LGBTTQQIAAP. Will we soon need an expanding set of guidelines on menus, depicting new diet categories as well as specifics such as gluten-free?

On the food front we already have:

– Full-spectrum omnivores who eat according to their choices without firm borders.

– Carnivores who will eat nothing but flesh – avoiding all vegetable, grain, etc. Not being a moral stance, occasionally they lapse.

– Bivalvegans – Vegans who include oysters, clams, and other bivalves without a nervous system to convey pain. Obviously contentious to straight-up vegans.

– Vegans – no animal products at all. No dairy, egg, honey, leather, wool, fur or presumably feathers.

– Fruitarians – Sub-category of vegan. At least 4 different interpretations with carrots and lettuce in none of them and seeds of all forms in some (grains, beans, nuts +),

As veganism grows, will we see it breaking into factions as did Christianity? It already has the trappings of a new religion, with the potential for heated argument and falling-out over details as numbers grow. For instance:

– Some vegans believe honey is ethical if the bees are well kept, since no bees are killed to produce it.

– I know two vegans who are happy to wear second-hand fur coats. Would similar logic apply to vegans who eat bacon discarded when past its sell by date?

– There are purely ethical vegans who regard meat as murder. Some may show little regard for the soil’s vitality or their own diverse gut flora, eating any old crap as long as there is no animal in it. Successful ‘Vegan Junk Food’ stalls do events and festivals.

– There are environmental vegans concerned mainly with greenhouse gases and the planet’s health. They will shun palm oil, avocados, almonds and food miles. As their prime concern is the planet they may in some circumstances lapse a little.

– There are self-interested vegans, who shun consumption of animal products primarily for their own health and that of our host planet. They are likely to be eating organically, and less strict with wool, leather and silk. Occasional dips into flexitarianism.

– And, of course, there are combinations of all the above, and raw food devotees.

– Now we know of the socially aware wood wide web, will a new class of vegans be avoiding wood products? Might they be veganarbs? How do we compare the life of a 100-year-old oak tree to that of a chicken or sardine? What is life like for a factory-farmed tree planted in neat rows on a once diversified hillside?

Who can tell whether the field will be further fragmented, or united, when lab-grown meat is affordable, grown with cells descended from an original living animal. If somebody developed cigarettes with no adverse health effects, would smoking in restaurants and buses become acceptable? Vaping is having a difficult time.

What’s my point? We have enough divisiveness in the world and it is not healthy for anyone, apart from politicians and arms makers. We are starting to see attacks by the meaty brigade on the environmental downside of plant-based eaters because they include almonds and avocados in their diet. Though vegetarians have traditionally been tolerant of meat-eaters, vegans tend towards intolerance. By not eating eggs and dairy they cannot be accused of hypocrisy for taking the moral high ground – just of fanaticism, at times.

Ethical vegans are likely to regard meat as murder, highlighted by the recent case of a young bride’s non-vegan family members banned from her wedding as she did not want murderers attending the special event. Of course, were the entire world to join this young lady in her holier-than-thou veganism it would spell disaster for the world’s chickens, goats, sheep, pigs and cattle. Some might be cherished as house pets or kept in zoos but the species would face disaster. Perhaps it is better never to have lived than to live an unhappy life, ended prematurely and brutally.

There are alternatives to the horrific factory farm – ‘ethical’ organic producers whose animals live a better life – but still get killed before their time, we hope humanely without pain or panic (for which there are methods). In a vegan world many human mammals in the Arctic Circle would starve while the other mammals would do well living off the fish and each other.

Factory farms are an abomination and future generations will look back in as much horror at them as we hope they will look back at a culture that celebrated conflict of the armed variety. The organised slaughter of human beings in military operations has even less validity than the mechanised mass slaughter of cows, which at least provide food for an omnivore. Yet we are conditioned to think both are normal. Are the two connected? I would suggest that they are supportive, at the least.

Vegans should remember that we are omnivores and have long included animal products and flesh in our diet – and that it is the horrors of the factory farm that are beyond the pale. We could live perfectly healthily on a 100% plant-based diet, unlike those domesticated animals who would largely perish if not part of our food chain. That’s absolutely fine if they go, and good news for badgers and otters, elephants and rainforests. There are countless benefits to being vegan, but kindness to cows, pigs and sheep is not one of them. The growth in vegetarians, vegans and ethical omnivores can put the factory farm out of business, dependent as it is on mass consumption and taxpayer-funded state subsidies. It’s changing.

We reap the harvest we deserve from the foods we choose to turn into ourselves. Leave it at that, which changes people when they ‘get’ it. Some of us got that 50 years ago, some 5 years ago, and some may not get it for years to come. We have enough hatred and division in our lives already without taking stands over what people eat. Lighten up, loosen up, and if others are offending your sense of morality, enjoy your own life and let karma deal with them. When we change what we eat we change the system and that is a powerful tool enough.

There is a chapter titled “Meat Of The Issue” my book The State Is Out Of Date. Brief summary here:  https://www.gregorysams.com/state-out-of-date-chapter-summaries.html#chapter26

All Posts »
PrevPreviousSee me, hear me, feel me
NextCovid-19 – Has James Bond failed us? March, 2020Next

11 thoughts on “Bivalvegans – it’s getting divisive”