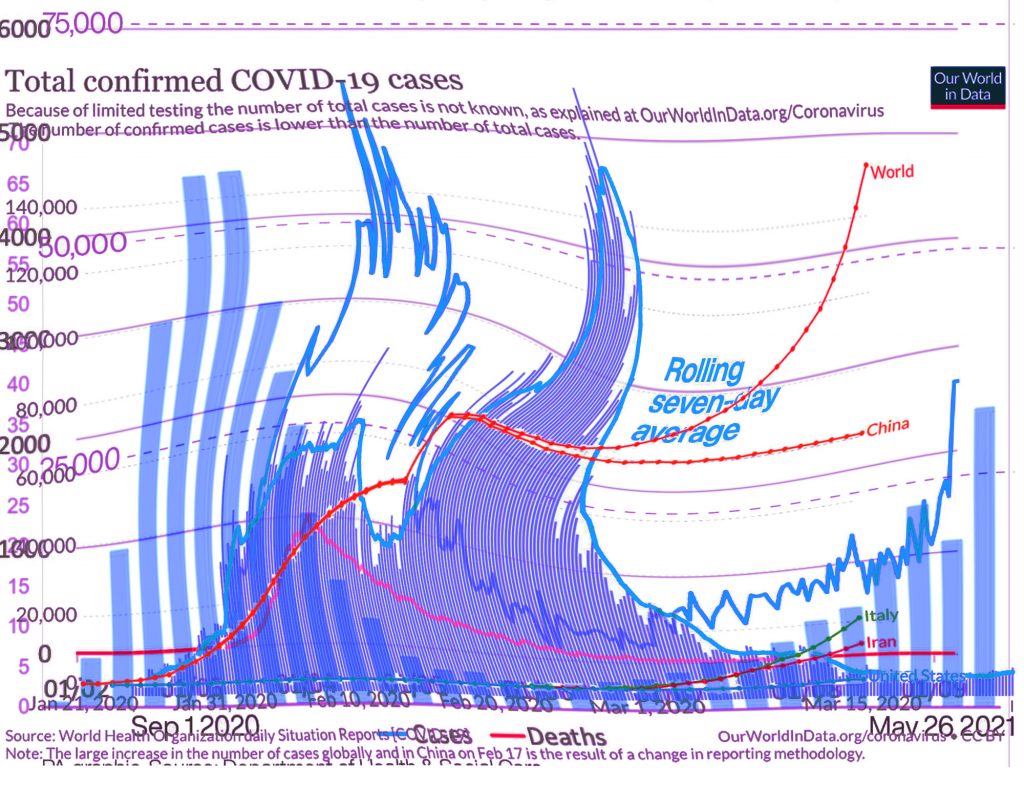 Numbers need meaning, and we do not get meaning from those that dominate the news.

Would you have ever guessed that Peru has had over twice as many deaths as Brazil – per capita? They are both high, but Peru, which imposed strict lockdown and travel controls early on, doesn’t make the news. The US has one third the level of Covid-related deaths of Peru and fewer than the UK. Yet we constantly hear that it has more deaths than anywhere in the world (true, but not per capita).  The USA ranks No.21 in the world for deaths per million, just under Britain at No.20. Death per million: Peru – 5775; Brazil 2446; USA 1866.

Of late, the news has been dominated by cases, focusing on what variant they are. Regardless of variant, this number of cases is meaningless* unless related to cases per head of population. Double the testing and cases will double. Halve it and cases will halve. It isn’t rocket science; it isn’t even science. It is just number generation. We are not being told whether cases per head of population are going up, down or sideways.  *(Meaningful, perhaps, to the world’s 660 new post-Covid billionaires)

Most of those publicised case numbers would never have noticed an infection that is only detectable by a highly sensitive device, known for its inaccuracy and specifically designed to determine the cause of disease in symptomatic cases.

I am not trying to make sense of these numbers, given the known inaccuracy of the tests themselves. We also know that most of the deaths are “deaths with Covid.” In Britain, this covers anyone who has tested positive for Covid-19 in the 28 days before dying, for whatever reason. Yes, that includes death by car crash and suicide. Hospital admissions are all tested for Covid on arrival. According to CDC figures in the US, 94% of “Covid deaths” died with 2+ other comorbidities, and in just 6% of cases Covid was the sole cause of death. Average age of Covid deaths are close to average age of any death.

Even if the PCR tests were 100% accurate, when no per capita numbers are given one might suspect management of figures to create a desired effect. So much emphasis is given to a number that is easily managed and means nothing. Why?

We have been told this is an existential crisis on a par with World War2. What rubbish! In WW2 most of Europe’s population knew personally of several or more who had tragically died, whether from bombing, on the field of battle or as collateral damage. War ravaged the continent. This lab-enhanced version of the cold is comparable to a very bad flu, and as with flu cases, it can also kill a few and permanently damage some survivors. It does not compare to the bombing of Dresden, the Battle of Stalingrad or the D-Day landings. Were it not rammed down our throats daily, most would be hardly aware that there was a new virus out there, and more concerned by knife crime, suicide, opioid addiction, cancer, malnutrition, corruption in high office, bank stability, the aftermath of warmongering, and more.

The only valid comparison with WW2 would be to the level of economic damage done by the well-orchestrated response to save us from a virus with an average 99.97% survival rate, if infected. They might as well have dropped bombs on countless cafés, theatres, cinemas, hotels, pubs, restaurants, airports and passenger ships across the world. Hardship and deprivation will follow. At least customers returned when WW2 bomb damage was rebuilt.

Every death is tragic, but take a hard look at the numbers of death per million in the sample of nations below. Most would agree that we do not stop the entire world and vaccinate its populations to save 1000 lives. The only question is: where do you draw the line?

In Britain the total who died within 28 days of testing positive for Covid comes to 1 in every 532 of the population. The numbers add up, but the average victim is over 80 with over 2 co-morbidities. Cancer and heart disease continue to be the biggest killers.

In Brazil one in 408 have died with Covid.

I would like to say ‘let the figures speak for themselves,’ but they say nothing. They convey an atmosphere of fear with scary numbers repetitively force fed by the mainstream. If numbers are coming down it’s due to the vaccines. If they are going up it is due to the unvaccinated. If they need to scare, then forecast overflowing hospitals based on case numbers – many of whom are schoolchildren with a near zero chance of noticing or transmitting their asymptomatic infection, let alone filling hospitals.

Should you be interested, about 1 in 200 people who are tested test positive, and according to the PCR test data, some 4 out of 5 positive results could be false positives. The actual cases detected may or may not have any symptoms and, despite what we were told, asymptomatic transmission is extremely rare.

Remember that in Britain this all began with the need to ‘flatten the curve’ of hospital admissions. There was no supposition that cases or deaths would be affected, just the rate at which hospitalisation occurred. We flattened the curve and hospitals were never overwhelmed. When we look at the long-term data for Sweden, the world’s only control group, and compare US states that dropped masks & distancing to those that have not, it looks as if those measures made no difference to spread and transmission.

Forget about cases counted. We must set our levels of alarm and fear based on personal experience of people who died with Covid-19 as the primary cause. The numbers will be dwarfed, for most, by friends lost to cancer, heart disease, suicide, knifes or drugs. Covid is no longer even in the top twenty causes of death in the UK, yet millions are terrified. Perhaps that is the most terrifying aspect of it all.

All Posts »
PrevPreviousBeen naughty, got punished, had fun!
NextWhat a state we are in! the PodcastNext

2 thoughts on “THE CASE AGAINST CASES”