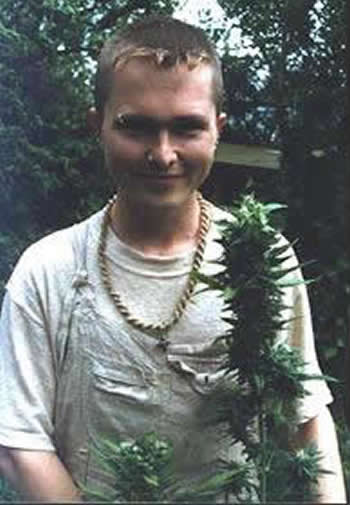 It's 10:00 am at Southwark Crown Court. A single cameraman from Sky News awaits the arrival of Free Rob Cannabis, come to plead innocent against the charge of possessing a marijuana plant. There is no contention that he possessed the plant - he was in front of the Home Office at the time trying to present the plant to Jack Straw. He was arrested by PC Tullock who testifies: "I arrested Mr Cannabis for possession of a cannabis plant."

Rob's argument, indeed his counter-charge, is that the law itself is guilty - that the laws against cannabis cultivation and use are, themselves, crimes against humanity and perversions of justice. He came, determined to point out to the jury that they possess the right, indeed carry the duty, to pass judgement on the law itself. This right and duty are enshrined in the Magna Carta and carry through to this day in both the U.S.A. and England. Few judges are aware of this troubling little right, historically used by juries to free suffragettes, and American patriots before Independence from England was declared in 1776.

Dressed from head to toe in hemp clothing, Rob defended himself by prosecuting the law, and did a brilliant and confident job of it. He spoke with spirit and clarity to the judge and the jurors, and even thanked the Prosecution for arresting him. Indeed, though the judge went to great pains to advise Rob that he would not be allowed to discuss the law itself - Rob was able to make most of his main points in court. He discussed the relative death rates of alcohol, tobacco, and pot. He let the jury know they had a duty to make a moral decision on whether or not a plant could be illegal. He told them about the British judge in colonial America who put a jury in jail for two days on bread and water for finding innocent a patriot who had clearly broken the law. The judge would stop Free Rob from time to time, but not before his points had been made. And throughout, the judge and all assembled referred to him solemnly as Mr Cannabis.

The judge advised the jury that he wanted a unanimous verdict, and after some three hours deliberation the jury returned hung. At this the judge exploded and told them most vehemently that their job was NOT to interpret the law but just to determine whether Mr Cannabis had broken the law which makes possession of a cannabis plant illegal. They appeared quite terrified by his intimidating outburst and came back with the unanimous guilty verdict the judge had virtually demanded. Perhaps Rob should not have mentioned that bread and water incident in colonial America.

Free R. Cannabis was given a conditional discharge and the judge awarded the prosecution costs of £100 (against their £25,000 expenditure), granting Mr Cannabis six months to pay. Outside the courtroom Free Cannabis was contemplating ways of writing his cheque out on a cannabis leaf.

Free Rob Cannabis is based in Glastonbury where you can find him at Hemp In Avalon, a shop devoted to the cannabis plant. 1a Market Place, BA6 9HD - phone 01458 835 769