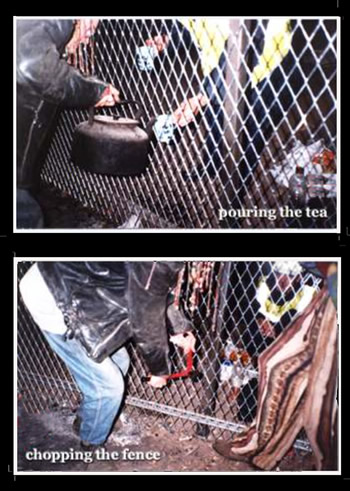 The first hint of the evenings events was shortly after we arrived on Sunday afternoon in Gotan Camp at the Newbury bypass where the "security" have just erected a compound. As we walk up to the fence in the daytime with our friend Susannah, several of the guards ask her what the plans are for tonight as, if it's going to be as much fun as the previous evening they want to volunteer for the night shift. The compound is a razor-wire fenced enclosure containing, at this time, nothing other than several generators to power the very bright floodlights and a few portable toilets for the 30-50 security staff on the site.

In fact, the compound is like an inside-out prison with the guards confined until the end of their shift, defending the fence from the would-be convicts outside who they think are trying to get in. In fact nobody is really trying to get in because there is nothing there but a barren concentration camp-like space which will eventually house construction equipment. The only object is to damage enough fence each evening to delay the arrival of heavy equipment which must wait for the site to be declared secure.

Meanwhile, the cross-fence fraternity is astounding, as we build half a dozen glowing wood fires around the perimeter of the compound at the very edge of the fence, and erect a sound system to play music through the night. We all huddle around the fires, with the compound fence running through the middle of our circle. Our main camp kettle is the only source of hot water for the guards' vacuum flasks and teamaking. I see protester Heather kindly filling one of the guard's cups through the fence, and reappearing moments later armed with fence shearing bolt-cutters - as he sits to enjoy his tea. The guard quietly implores her to "please desist," whilst relaxing with cuppa and sandwich. I discover later that Heather (Ripley) previously starred as Jemima in Chitty Chitty Bang Bang.

Several of the guards have brought in extra rations of home-made cakes, or stew to pass over the fence to the demonstrators. One of our lads displays a prized jumper he has found in the "tat shop," filled with donated clothes. Several guards compliment him so much on it that he ends up bartering it with a security guard for a piece of pretty good hashish. We provide the evening's sounds from a roaming wheelbarrow-based system with the music ranging from Abba to psychedelic trance with occasional nursery rhymes thrown in for psychological effect. Our people are dancing to it and occasional requests are made by the guards.

Every now and again the 'pixies' come out of the darkness, their faces heavily swathed in wrappings, carrying various types of fence cutting and damaging equipment They calmly clip away at the fence as security guards kick their feet against the other side to try and prevent the blades from reaching through. Meanwhile other security are running round from their compound entrance to stop the cutting from the outside, but the pixies usually disappear into the woods before they arrive. If they don't, they are liable to have their precious bolt-clippers taken away.

At one point early on, one of the "red-hats" (sergeant level guards) runs up to a fence-clipping from inside and starts menacingly poking a stick through at the clipper. The clipper retreats in outrage and returns moments later without his bolt cutter to demand the name of the red-hat who was attacking him illegally in this manner. The guards at the fence, red and white hats alike are all sheepish, and soon start to decry the fence poker and assure us that it will not happen again and that the offender was being dealt with. This seemed to calm the air and indeed it did not happen again.

Each time an incident occurs, two green-hats (Bray Security Agency) appear out of the centre of the compound carrying camera and lights to record what they can of the offenders. They never speak to either the guards or the protesters and seem well programmed to their nasty work. Everybody resents their presence, though my friend Susannah welcomes them as "our official chroniclers." But until they depart, hoods and facewraps are re-arranged by those whose prefer anonymity tonight. Some on the site have warrants and injunctions outstanding that could cost them 2 years of their liberty if identified.

The incidents are all without rancor (save the stick-poking incident). There is much genuine sympathy felt and shown by the protesters for our more deprived campfire comrades on the other side of the fence and they are an interesting and often drifting cross-section of society. A few of them will doubtless cross the fence at some point, as has happened in the past.