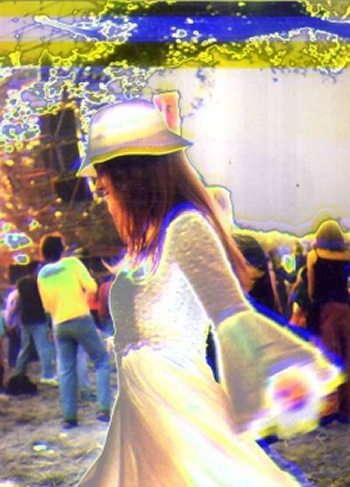 How to describe the best party you have ever experienced and the best experience you have ever partied? Trippers from all over the world came together for ten days in the heart of Africa, awaiting the total solar eclipse which tore a strip across the continent on June 21st, 2001. Solipse have pulled it off once again, this time on a sprawling farmland site in Zambia. Their last party in Hungary for the 1999 European eclipse brought together some 15,000 devotees from across the world and delivered an unparalleled array of top bands and DJ's. That was a brilliant and memorable experience for the party-goers, peppered with occasional complaints from some of those involved on other levels. The site layout by organizer, Fish, was nothing short of inspired. There were occasional lapses of the infrastructure and organization, some it suffered by myself, but I am eternally grateful to the Universe for getting my ass to Hungary for that bliss-filled event, against all odds and "normal" sense.

In Zambia the infrastructure was superb with a full range of cafes, shops, facilities, and even a bush supermarket with tents, fresh veg, batteries, etc. There was a good and cheap local restaurant a mile off site, owned by George, who also provided the farm on which we festied. All the site's facilities were designed for minimum litter and plastic debris. The VIP's were lodged by the organizer in converted pigsties (a novel idea). People from the party crew, not hired Zambians, discreetly scoured the dance floor collecting crumpled cigarette packs and other rubbish. It makes a difference.

As a result of factors X, Y, and Kryptonite, a few of the bands and DJ's booked for Africa cancelled or failed to turn up. Nevertheless, the majority of those scheduled did arrive to deliver their best. And though some gave more than they had planned there were inevitably dark patches when, with any luck, you were not desperate to be on the dance floor and more into enjoying the rich treasure of people and places in this freak-built town. The sound system was superb, and site decoration of the highest order with Garet providing much of the hanging art.

Four and a half thousand of the trance community gathered once again, from Europe, Japan, North America, Israel, Brazil, and especially from South Africa. I had no idea! That country provided about a thousand of the finest freaks you'd like to meet. Adept at outdoor living and home growing, their shops and presence were a welcome addition to the mix of the event. The Japanese had the longest voyage, apparently unable to fly direct to anywhere but Johannesburg, and then travelling 2-4 days on a bus. I am very happy that they made the effort.

Most of those one met or knew at this party were experiencing the most moving and memorable event of their life. These were the finest members of the trance community - the remote African location serving as a filter for the hangers-on and spectators. It was free out there - the first festival this writer has been to since Stonehenge 1984 at which exotic cultural substances were priced on boards next to the menu-board for tea, coffee and sandwiches. You just knew there were no Gestapo wannabees in your midst, reporting to superiors.

On the big day, the always ecstatic Total Eclipse played a perfect final set and the sound system was silenced before the eclipse began. We wait now, as the shadow of the moon rushes toward us at 2200 kilometers per hour. Whoops and shouts erupt as the moon takes its first tiny bite from the Sun, visible only through the freely-distributed darkened glasses. Curiously, when 70%+ of the Sun has been "consumed," and you remove the glasses, there isn't any noticeable dimming of the Sun or darkening of the sky (or cooling of the temperature). Excitement mounts, but it all really explodes at the moment the eclipse goes from 99% to 100% - TOTALITY - and you throw off your silly glasses and stare straight at the black hole that was only just your Sun, and marvel at the electro-magnetic vibrations of it's corona. We had it for nearly four and a half minutes. Several couples became engaged, many special batteries were recharged, many spirits restored, many resolutions made - it brought us all together.

My finest night was that following the eclipse, when Shakta kicked in after midnight with a full-on set that got the dance floor heaving. Then came the Aussie wizard Ollie Wisdom, taking us yet higher and higher. Frankie followed on the decks, just getting us primed for his next appearance as Kox Box live. And we go higher and higher as the Sun does the same in the African sky, twinkling through the leaves of the giant fig tree shading the dance floor. Atmos played next, easing up the pressure and nudging still higher the pleasure. Dimitri followed, but at this time, I could not have been alone in having either run out of drugs, or reached unserviceable levels of tolerance. Friday afternoon and night were for rest and re-creation.

Off the main stage and away from the site-action, the night sky was spectacular. At 4000 feet with minimal light pollution and no moon, the African sky was a vibrant metropolis of stars, each one clearly its own specific phenomenon. The Milky Way looks like a long rambling cloud in the dark sky. The nights were cold, requiring a severe wardrobe change soon after Sunset. During the nights the raging dance floor and the ubiquitous wood fires provided the main alternatives to an unheated tent. I was very happy to have purchased a good sleeping bag at the shopping mall outside Lusaka. The daytime Sun was predictable, gentle and warm, never oppressive during this winter in the southern hemisphere.

It was all happening at Solipse in Africa. There were magic touches too, such as the two busloads of local AIDS orphans, arriving to sing us a couple of songs and then going for it on the dance floor when the trance kicked back in. There were non-stop psychedelic movies most nights, a healing area and sacred space, talks, good campgrounds and loads more. The top band in Zambia made an impact strolling around the site in their black leather outfits - eventually delivering a hot reggae set in the late afternoon. And there was the longest single and silent firework I've ever seen, racing skyward like a rocket and exploding into a dozen or more synchronized flares slowly drifting downwards over 3 minutes, extinguishing themselves a few yards short of ground. The whole festival was designed from the bottom up to be clean and non-polluting.

All the Zambians I met, whether working at the festival, visiting it, or outside it were good-natured and helpful, with English as their first language One of those I spoke to, working on site, wanted a cassette of this music he loved and could hardly hope to source in Zambia. He told me how he had never heard music like this before and I pointed out to him that, for every one of us enjoying this festival, there was a time when we had never heard it either. He liked that.

The organizer, Fish (aka William Shakespeare) has beaten all the odds, and managed to pull the party off despite being some 2000 punters short of an adequate pot and without financial reserves. Some performers and workers had cause for upset. Some were not so concerned, feeling honoured to have been part of such an awesome event. Even farmer George, who nursed some serious complaints, was thrilled to have witnessed us all arrive and create this beautiful small town on his land. It was something, he said, that he could never have imagined. He hoped we could all come back again but the next eclipse there isn't for 20,000 years of so.

The paying partyers and the traders all seemed to have no complaints about this one. Its a great shame that rumour-mongering and downtalking dissuaded a few thousand more of our community from getting to this joy-filled stellar event. This would have made all the difference to the financial outcome and set an even-higher standard for the next "best party ever." So gratitude to Fish, all the performers, Nick, Charly, Chester, Leila, Mark, Billy, Nigel, Yiorgos, Butterfly, the Emithini posse and all the others who enabled this brilliant event or triggered getting me to it And big biggest thanks to the thousands with the faith to come and turn that remote farmland into a vibrant community-forging festival of love and light and gratitude to our Sun.